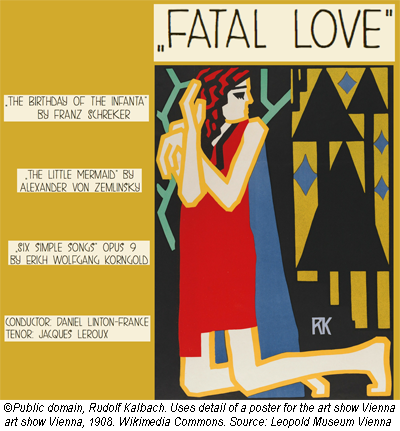 „Fatal love“ is the main theme shared between Franz Schreker´s picturesque „The birthday of the Infanta“ based on the fairy tale by Oscar Wilde and Alexander von Zemlinsky´s epic rendition of Hans Christian Andersen´s
„The little Mermaid“. Both works were composed in Vienna during the beginning of the 20th century. Erich Wolfgang Korngold´s „Six simple songs“ Opus 9, proof of his youthful genius, complete this collection of works giving a diverse impression of Vienna prior to WWI.

For the Ballet production „The little Mermaid“ in 2016 by the Choreograph, Mei Hong Lin, at the „State-theatre of Upper Austria“, Daniel Linton-France performed Schreker´s „The Birthday of the Infanta“ and „Zemlinsky´s “Little Mermaid“ with the „Bruckner Orchestra, Linz“ to great acclaim amongst audience and critics alike.

„Daniel Linton-France elicited a magical, enticing sound from the Bruckner Orchestra. He let the music flow in all it´s intricacy, gentleness, brusqueness, radiance and gloominess, with great suspense but always precise and detailed.“

„Under the masterful direction of Daniel Linton-France, the Bruckner Orchestra presented superbly the sound worlds of Schreker and Zemlinsky.“

Performance and rehearsal excerpts may be heard under the following links:

„The Marionettes“ from „The Birthday of the Infanta“ by Franz Schreker
youtu.be/pldL7iQ5WH8

Franz Schreker composed „The Birthday of the Infanta“ in 1908 as a commission by the Wiesenthal sisters, who were famous dancers in Vienna at the time. The material for this new pantomime-style of performance came from Oscar Wilde´s collection of fairy tales „A House of Pomegranates“.
In short, the plot is as follows:
A sultan has sent a dwarf as a present to the Infanta (Spanish princess) Donna Clara on her birthday. The dwarf is unaware of his physical deformity and becomes infatuated with the Infanta. He sings her a love song and imagines himself her brave knight. She toys with him and gives him a white rose as a present. Left alone, he accidentally uncovers a mirror and sees his own reflection for the first time. In great agitation, he tries to obtain a kiss from the Infanta, but she spurns him and calls him a monster. His heart broken, he dies clutching the white rose as the Infanta rejoins the party.

„A caricature – chinless, small, with eyes popping out and a crazy manner of conducting.“ This is a diary excerpt by Alma Mahler neé Schindler referring to her former teacher and lover Alexander von Zemlinsky. Between 1919 and 1921 Zemlinsky composed the single act opera „The Dwarf“, also based on
Oscar Wilde´s fairy tale „The Birthday of the Infanta“. The parallels between Zemlinsky´s relationship toward Alma Schindler and his choice of libretto cannot be overseen.

Following a performance by Richard Strauss of his symphonic poems in January 1901 in Vienna, Schönberg and Zemlinsky were provoked by claims that
Strauss´ symphonic works were the pinnacle of the art of composition. Schönberg begann soon after with the composition of „Pelleas and Melisande“ while Zemlinsky chose to put Hans Christian Andersen´s unhappy love story, „The Little Mermaid“ to music. Zemlinsky began with the composition early in 1902, shortly after breaking off his liaison with Alma Schindler and completed it parallel to his duties as „Kapellmeister“ at the „Carl-theatre“ in Vienna on the 20th of March 1903. The premiere took place on the 25th of January, 1905 in a concert of the „Vereinigung schaffender Tonkünstler in Wien“, in which Schönberg´s Pelleas and Melisande was also premiered. The viennese musicologist and critic, Richard Specht commented on the premiere of the
„Little Mermaid“:
„One senses that some incident has taken place in the artist´s life – whether good or bad, it has fateful significance.“

The „Six simple songs“ Opus 9 by Erich Wolfgang Korngold were composed between 1911 and 1916, during which time he was briefly studying composition with Zemlinsky. The arrangement of the original (voice and piano) for chamber orchestra was completed by the composer and conductor Ingo Ingensand.

A concert recording of the arrangement may be heard under the following link (Tenor – Jacques LeRoux, Conductor- Daniel Linton-France): youtu.be/ygQ7r0xZzL0

For more about the conductor Daniel Linton-France please visit: www.daniellinton-france.com

For more about the tenor Jacques LeRoux please visit: www.jacques-le-roux.com